This may seem like an unusual topic but I'm a fan of many things and will be telling you about them over the next few months. Today the topic is football.
No-one appears to be exactly sure about Bill Shankly’s oft-quoted words when he was manager of Liverpool from 1959 to 1974, but this version is widely quoted.  ‘Some people believe that football is a matter of life and death ….. I can assure you, that it’s much more important than that.’


When I was writing the blurb to describe myself for the publisher of my first novel, Sporting Chance, I put that I could usually be found crying about my favourite football team – well, this afternoon that was certainly true as Cardiff City went down 4-0 to Sunderland and will now probably be relegated back to the Championship. It is hard for anyone who isn’t a football fan, or sports fan in general, to understand how being a fan can get under your skin but it can and when they lose it hurts, especially if they’ve been unlucky.
The picture shows Cardiff in happier days when they were promoted last year. 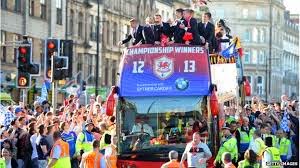 I wasn’t always a Cardiff City fan despite having been born only a few miles away, but I‘ve always loved watching the beautiful game. One Saturday, back in 1977, I went to a FA Cup match with my friend Linda and her dad. It was the 4th round and Cardiff were at home to Wrexham. I went vaguely supporting Wrexham – anyone but Cardiff – but by the end of a thrilling game, which Cardiff won 3-2 in the last minute, I was a fan and for the next two years I went to every home game, come rain or shine until I left to go to university. Cardiff, along with Leeds United, became the team I followed. At this stage I should point out that one of the main reasons I went to Leeds University was so I could go and watch them at Elland Road!
This is the day Leeds won the FA Cup in 1972. I started supporting Leeds around 1968/9. Then, and during the early 70s, they were the best team around. The men in the picture are Allan (Sniffer) Clarke who scored the only goal, David Harvey, Billy Bremner (Captain) and Jack Charlton, brother of Bobby. 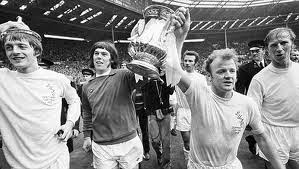 If you’re a real fan you stay with your team come hell or high water and supporting Cardiff and Leeds means I’ve seen a lot of both. From your seat you play every ball, shout at the referee, point out the man on his own out to the left or right ready to make a run down the wing, put your head in your hands when the ball hits the post or the bar and generally live every moment.  Today isn’t the greatest of days to be a Cardiff fan but deep in my heart I know that someday soon there will be a better time. This is what keeps you hanging on – the hope, no matter how small that things will be better.
Posted by Alexa Milne at 01:41