What’s wrong with a happy ever after?


I write romance with happy ever afters or HEAs. I read a lot of books, and I watch a lot of television. Recently, I’ve begun to get angry while watching certain programmes, especially on the BBC because it appears that same sex couples cannot have a happy ever after, even for a few days. This afternoon, I’m watching WPC56 knowing the gay inspector of police is going to be exposed and it’ll probably end badly. Alright, it’s set at a time when homosexuality was illegal, but all the same the pair could go on quietly meeting.


On Sunday I watch Call the Midwife with my tissues at the ready. Like many others, I’ve been hoping that Patsy and Delia would set up their home and be happy – but no – Delia has an accident and loses her memory on the day they were going to move in together. A few weeks ago Caroline, the stuffy but wonderful head teacher, married Kate in Last Tango in Halifax. That marriage lasted a day with Kate dying the day after, leaving Caroline to cope with her loss and looking after a new born baby. A lot of tweets compared the two events and asked the same question of why it was necessary and I ask the same thing. Why can’t we have the gay version of Hilda and Stan and Jack and Vera – couples who have their problems but who love each other and have a love that lasts for years? I’ve read stories of many real life gay couples who’ve been together for decades. Today is the birthday of John Barrowman, who has been with his husband Scott for well over twenty years. Same sex couples have always existed in secret and in the open, living quiet lives with each other, but this doesn’t seem to be allowed on television and don't get me started on the teasing (and I can think of other names for it) of the relationship between Dean and Castiel in Supernatural.


Strangely, I started writing after the death of one half of a gay TV couple – Ianto Jones – the coffee making, suit wearing, devastatingly handsome lover of the omnisexual Captain Jack Harkness in Torchwood. 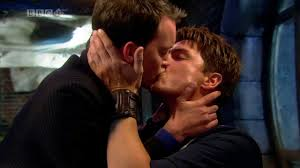 The out pouring of anger about this event is legendary. The shrine to Ianto Jones remains in Cardiff Bay nearly six years after his death. I, like many others, wrote Children of Earth fix-it stories where Ianto lived on revived by nanogenes or the Doctor turning back time. Here was another example of a same sex couple not getting a HEA – but this is Russell T Davies and he’d already killed off Owen and Tosh, so he had a track record of using death to create drama, and for those who watch Cucumber, you’ll have seen that Henry and Lance were doomed from the start.


I can only think of one couple who got to walk away from a programme and that was Syed and Christian on Eastenders, although I don’t think there was no mention of Syed when Christian appeared recently. Maybe you can think of another. I’d be happy to know that some couples didn’t end up with one of them dead, like Tara in Buffy, or even the fat one in the gay Anglican couple in Doctor Who!


It’s taken me forty minutes to write this piece and I was right. WPC56 has ended with the two men found in bed and arrested. I hate this. I know it happened, and I know we have to represent the past, but it’s the same in the present. I’m angry and sad at the same time. It’s taken long enough for gay people to be represented on television in a positive way, so why can’t same sex couples have a HEA like they do in the books I read and write. It’s long past time that TV caught up.
Posted by Alexa Milne at 08:34