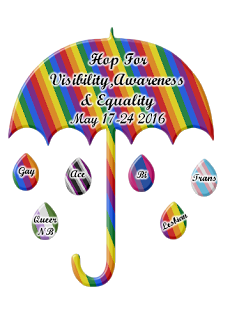 This hop is about visibility, awareness and equality. I joined late, having missed the announcement, so I wasn’t sure what to write about but then I remembered this post by Sue Brown about heroes and the dangers of putting them on pedestals. This had made me think about my heroes.


When I was young my heroes were mostly footballers – not much visibility there, but hopefully more awareness than when I was a teenager. Another lifelong love is Katherine Hepburn, still my favourite actor. A strong woman who worked in an industry at a time when appearance was often considered more important than talent. Now, I’d say two of my biggest heroes are John Barrowman and Misha Collins. 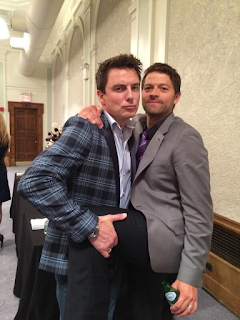 Here are my two favourites together. I hope they won’t mind me using this image which sums up both men for me. I can honestly say I don’t put them on pedestals and I don’t think either would feel comfortable there. JB is all about visibility and awareness. He doesn’t hide his sexuality, as anyone who follows him on the media knows. In fact many would accuse him of oversharing considering his last Facebook video gave us all an extra bonus in the shape of his husband, Scott. With JB you love him or you don’t. He is great with his fans and supports lots of charities including a shelter for LGBT youth near his Californian home. His work ethic is second to none as he travels around the world. He is quite simply an entertainer who personifies out and proud.


My other hero, Misha Collins is perhaps less well known in Britain. He plays the angel Castiel in Supernatural. I didn’t start watching that show until it had already got to season seven. I binged the early seasons and fell in love with Castiel the moment he strode onto the set. Since then, I’ve also come to love the man behind the role he plays. He too works tirelessly for charity, creating both Random Acts of Kindness and GISHWHES – the greatest scavenger hunt the world has ever seen. He’s also been visible in his support of LGBT rights and commented on how Supernatural has dealt with LGBT characters. This, I am pleased to say is improving.


Whether they are perfect or flawed, we all need our heroes. We need people who will take a stand. John Barrowman and Misha Collins are two of mine. Who are your heroes?