Weekly Round Up 24th April 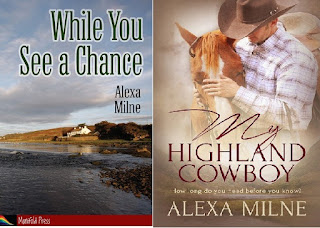 This weekly round-up is becoming a fortnightly one. Last week was a bank holiday over here so I had a rest. I hope everyone had a lovely Easter and ate as many eggs as you wanted.


I have written some words over the last two weeks – not my target of 5000 a week but around 6-7000. I’m not sure exactly. My WIP is at 84K with a lot more of the story to write. I may have to split it then write a third. I’m not sure yet. I’ve also been collecting ideas for a Christmas story, though I need to get on with it. This will be a May/September story. I’ve also been buy writing blog posts for the releases of next two books. More below.


On the reading front, I’ve read a few books. Trapped by Ruby Moore continues my love for historical romances. I’ve developed a passion for them and wish I could write one. I’ve re-read Widdeshins by Jordan L Hawk. I love this series. Current read and nearly finished is Starting from Scratch by Jay Northcote and next up is NR Walker’s sneaky crossover Red Dirt Heart Imago.


The Supernatural rewatch continues with the completion of season 4. I love this one with the introduction of the angels and Ruby’s machinations. All those long looks and Misha Collins’s non-blinking with those beautiful blue eyes.

Current watch is Fargo Season 1 which is as dark and quirky as the film. Sometimes, I think I’m supposed to like the bad guy and at other times not. I really have no idea how the people of Minnesota live with all that snow. Supernatural season 5 will be next up. We’ve also watched Fantastic Beasts and Rogue One and enjoyed both. Star Trek Beyond will be next. It’s tough being behind everyone else because I can’t get to the cinema.


This week again I’m hoping to get some words done, get over the last story plot point, and decide how far to go with the end to see if there is another book in this. I’ve blog posts to write for both books. While You See a Chance, my older MC story set in my home area is on 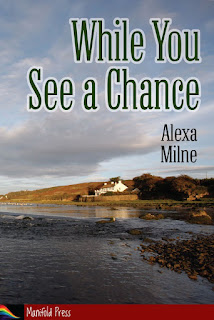 general release on 1st May. There will be a release blitz and a Q&A held by Manifold Press the week after. My Highland Cowboy is up for pre-order from tomorrow with Pride Publishing. In this story, Duncan owns a ranch where you can go on round-ups or learn cowboy skills, but this ranch is in the Highlands of Scotland. Into his life walks the challenging Drew who turns his expectations upside down.


That’s it for me. As well as the writing, I’m busy do some family history research for myself and another person. It’s always fun finding out about people, and you never know when you’re going to get an idea for a story.
You can preorder While You See a Chance on Amazon here and My Highland Cowboy from tomorrow here