Weekly Round Up 31st July

Morning everyone from an unsettled Lancashire – me and the weather. How did we get to the last day in July? Sorry about last week – had a day of feeling tired and irritable and words wouldn’t come. Cat the elder has a yowl that could pierce steel, and she uses it from five in the morning, so lack of sleep has been a problem. She is old and deaf, but since we’ve put her in the kitchen overnight, she’s been okay, and I’m not so worried about the neighbours. Real life has also been rearing its ugly head. Hoping for some more positive news soon. 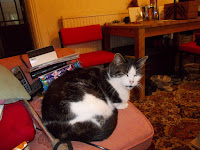 Writing has been slow. I’ve managed a few thousand on current WIP, but it’s hard going. I think even the voices have been too tired to talk to me. Trouble is, I know where the story is going, I even have a last scene written, but the in between, and getting the pair to that point, is eluding me. Instead, I’ve been editing Half Full, but it is 100K words, so doing my first sweep for certain words is taking time and, as I read, I realise the kitten timeline is totally rubbish. So, plans are to do as much as I can because some words are better than none. I will probably get my short story, The Matchmaker, to edit soon. This comes out as part of an anthology of contemporary stories with Pride Publishing in September/October.


On the reading front, I’ve managed a few including Robert Winter’s Lying Eyes, which I enjoyed except for, the Stoke accent. I find some accents difficult in books, especially if the person has simply looked up the accent and never heard it spoken. I’ve been told off for using typically English, Scottish or Welsh phrases in my books as well as for not including them. Accents work better in some books than others. Avery Cockburn’s Glasgow Lads is one example of getting it right, although I found the Doric in the first book, challenging. I’ve stayed in the North East of Scotland many times, and not understood more than the words Janet, Hoos, Elvis and explosive charge in a conversation. Dialect words are one thing to set a book in a place, even phrases, but sometimes I find they throw me out of the story.


Other reading has included, Atonement by Sloane Kennedy, my first by this author. Took me a while to get into it, but once there, Magnus hit me right in the feels as they say. One of my favourite authors, Gail Carriger, who wrote the wonderful series, The Parasol Protectorate, has a new book out. I discovered I’d missed a couple of novellas set in that world so read and enjoyed Romancing the Inventor. Now, I’m not a lover of shifter books, but I love her steampunk world of werewolves and vampires, so I’ll try her new one set in an alternative San Francisco. Current read is Felice Stevens, The Shape of You. I’ve been putting this off, and I know it’s going to be tough reading for me. I find books where one character is overweight problematic, but I thought I’d give this one a try. Early days yet.

Box set watching continues. We’re up to S11 of Supernatural, so not much left, and now on S3 of Orphan Black. I need to think what to watch after we’ve finished S11. I might try American Gods, but I’m not sure. Lots of current watches are coming to an end on TV now, as we get the summer recess and lots of repeats. I have enjoyed the Gay Britannia season of programmes tying in with the 1967 Sexual Offences Act which partially repealed laws and decriminalised some homosexual behaviour. It was a start, and along the way other obstacles appeared, including the awful Clause 28, which I’m proud to say as a teacher, I completely ignored. No one was telling me I couldn’t tell a teenager that being gay wasn’t normal. I wish I could find a sketch Ben Elton did at the time which questioned how the government then thought teachers were rubbish, but believed they’d be able to make everyone of their pupils gay with a few words. The film, Pride, was on TV last night. If you’ve never seen it, please do. The women in it are fantastic, and want to hope the character played by Bill Nighy finds love after so many years attempting to hide his sexuality.

That’s it for this week. I’ve had some more lovely reviews for My Highland Cowboy, so if you want a low angst, heart-warming read, it might be the one for you.

And just a reminder that today is the last day for getting 25% off Manifold Press books at Smashwords, including my older MC story, While You See a Chance.

Have a good week everyone.
Posted by Alexa Milne at 04:47