Morning from a dull and overcast Lancashire where it has just started to rain. Woke up this morning and it was one of those days when you know you’re alive because you ache all over – the joys of arthritis when the weather is damp. It’s been a couple of weeks since I wrote a blog so I hope everyone who glances at these things is all right. Recent events in Las Vegas show that you can take nothing for granted. I’m British and I don’t understand the need for guns many people in the US seem to have. Though, having said that both of my neighbours have guns they use for hunting rabbits. It’s not that we don’t have guns over here but that we don’t have automatic assault rifles or own so many guns and carry them around while shopping in Tesco. Even police carrying guns don’t make me feel safer when I see them on the street. I have fired an air rifle a long time again now shooting tins off the fence, but that’s my only experience.

On to other things. Last week Right Here, Right Now came out. This is an anthology of six contemporary gay romance stories by some great authors. Each story is different. Mine, The Matchmaker is quite fluffy and low angst and will be available on its own 17th October. Links to both are on my blog page where you will also find this piece.
I’ve spent most of the last week getting a final draft of the first part of what I’m calling my Half trilogy. Yes, this is the story of three halves. The first is Half Full and introduces the characters of Jonah and Owen as well as their friends and family. I love writing all the secondary characters and the dialogue between them and the MCs. The idea for this story came from a documentary I saw about an athlete who’d been adopted a few years back so you know one of the MCs, Owen is adopted, but he isn’t an athlete. He’s a librarian and mixed race/biracial – I’ve had different opinions about which I should use. The other MC, Jonah, is based on a secondary character from another story, who I wanted to give a story to but it wasn’t possible so I adapted him to fit into this one. I love Jonah. He’s a great believer in paying back, is full of life like Tigger, but has his own insecurities. He produces beautiful things from wood. I’m lucky to have Rebecca, my last editor from Pride, giving it the once over. Part two is written and with my beta, and part three has a lot of ideas and will be next writing when I finish WIP. I need to get back on track with the WIP, now called Two for the Road. It’s at 35K with probably about another 15K to write. At least they’ve got together at last! I’m still grinding it out slowly.
I’ve been reading a bit more lately and my TBR list is growing. I’ve finished Silk by K C Wells. Loved the story as I needed at bit of low angst. Raced through An Unsuitable Heir by K J Charles. Loved the while series and how the ending was sorted. Just started Axios, having read so much about it, by Jaclyn Osborn. I know very little about Sparta but watched all of Spartacus (Nagron needs no further explanation) and have studied Roman history so hoping that will help. I’ve some books by new to me writers, C F White, Annabeth Albert and Robin Covington on my TBR list. I am also eagerly awaiting Romancing the Werewolf by Gail Carriger. I loved the Parasol Protectorate series and two of my favourite characters are Biffy and Lyall. I wrote fanfic. The cover for this new book that brings these two together, is gorgeous – a corseted waistcoat – yum. I wish I could include it here.

On the watching front, I finished Shadowhunters and adored Magnus Bane. We watched World Without End based on the book by Ken Follett, and once again I was thankful not to have been female back then. We’ve started watching Star Trek Discovery. I am a huge fan and as I also love Jason Issacs, this is a must. I first loved Jason when he played Hook – love a pirate in a puffy white blouse or not as below. Our latest boxset watch is Buffy the Vampire Slayer – yes, all seven series which we may mix with Angel. Other excitement is the end of this summer's Hellatus with the return of Supernatural this week. 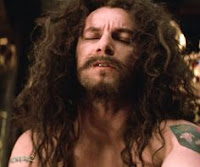 Right, I think that’s enough from me. Have a good week everyone and happy sales.

Oh and you can add The Matchmaker to your reading list if you'd like here
Posted by Alexa Milne at 02:54