OUT TODAY -Two for the Road 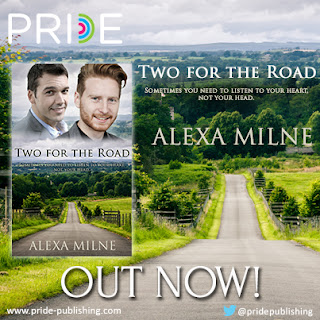 I have an actual book out on TODAY, Two for the Road, my age gap romance set in Lancashire. You’ll find the Amazon buying links here. You can also buy at Pride Publishing


Two for the Road is the story of MCs Riley Ormerod and Dylan Hargreaves. Riley has returned from London to the small village he grew up in. Despite his career as a successful lawyer, his personal life, in reality, hasn’t been all that it appears to be on the outside. When his father becomes ill, he decides the time has come to change his life. Little does Riley know that someone has been longing for his return.


Dylan Hargreaves fancied his father’s best friend when he met him as a teenager but had no idea he’d ever get to do other than dream about him. Now back from university and about to start a new job in the same city where Riley works, Dylan wangles getting a lift from the object of his desires. He figures spending a couple of hours a day might help getting Riley to notice him, despite their twenty-year age gap. 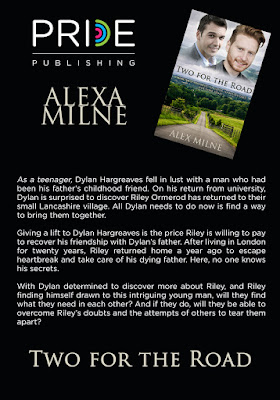 I loved writing Dylan. He is totally open and straightforward. He simply goes for what he wants. Riley, however, is anything but an open book. He hides his secrets, and he certainly doesn’t expect to develop feelings for the son of the man he was best friends with, growing up in a village where everyone knows each other’s business.


So, if you like fairly slow burn, age gap stories with friends and families, set in the UK, this may be the story for you.


Two for the Road is listed on Goodreads if you’d like to add it. If you have a review blog, Pride Publishing will usually provide a review copy if you request one. I’ll admit I haven’t done a tour as I’m just too nervous to contemplate one. Writing has been hard and imposter syndrome strong. But here it is, and I hope those of you who give it a chance enjoy reading Riley and Dylan’s story.