Fandom, Gay Romance, and Me

I came to fandom quite late in life. Don’t get me wrong, I’d been a fan of certain programmes, especially Doctor Who, for a long time, but I’d never connected with other fans until I went looking. The reason I went looking was the death of one character.

I was born into the generation who watched television, and I’ve watched a lot over my nearly sixty years, but only two programmes have sucked me in and torn at my emotions – ripping my heart to shreds. Those two programmes are Torchwood and Supernatural. It was the death of Ianto Jones in Torchwood that I can say with all truthfulness changed 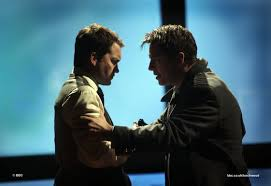 When Ianto died in the arms of his lover, Captain Jack Harkness, I cried. It wasn’t the first time I’d cried over the death of a character – see Dr Greene in ER – but, maybe because this coincided with my increased use of social media, I went looking for anything online I could find to see if others felt the same, and a whole world opened up. I found fandom. I found fanfiction. I found fanart. I found an online community of fans. I read, I watched, and I communicated. I found like- minded friends online, people who have become real friends even though we’ve never met in person, but I know will be there when I need them. Then, I started writing and I met other writers online. I discovered a new love. I wrote story after story about Torchwood. I wrote fix-its that were canon compliant and alternative. I wrote stories, from drabbles of 100 words to my biggest work of fanfiction, Torchwood High which is 200K words. I republished a re-edited version during lockdown. But what has this to do with gay romance you might ask?

I don’t know what it is about gay romance that first pulled me in. I’d never been a big reader of romance, except for reading family sagas and historical novels. They occasionally had gay characters who I found myself rooting for. I also read a lot of fantasy, especially the novels of Stephen Donaldson, Julian May, and Katherine Kerr. They too had gay characters. I loved sprawling stories and bought books by the inch with big themes. But romance is usually more intimate. Yes, that is obvious, and yes there are side characters. But essentially, the story is about two people finding each other, finding the person for them. Heterosexual romance, even that with its difficulties, is ‘acceptable’. LGBTQ+ romance provides another layer, even if there isn’t any conflict at all. Take Schitt’s Creek, for example. David and Patrick face no opposition at all in the story, but I was invested in their love story much more than that of Alexis and Ted. I love David, but I adore Patrick because he loved David and his many wonderful eccentricities. I love an opposites attract story.

Anyway, this brings me back to Ianto. As fans we watched as he struggled with his feelings for Jack. Jack had killed his girlfriend, and yet, like many others, Ianto was drawn to him. Maybe it was sex at first, just a bit of fun with a stopwatch. But by the time he died, their story had developed into a love story. When Ianto whispers his love for Jack as he dies, it’s heart breaking because you think that there will be no more and I wanted more, even down to buying curtains—old joke. Fortunately, because of the audio plays from the BBC and Big Finish, this isn’t the case, but at the time, it felt like the end had come to soon. Fandom exploded. Accusations of ‘bury the gays’ were levelled at Russell T Davies. A shrine was built to Ianto, a fictional character, in Cardiff Bay. This shrine is still there eleven years later. 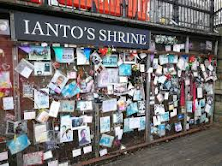 Back to Doctor Who and Matt Smith’s eleventh Doctor and the connection to my other obsession. The opening episodes of series six, The Impossible Astronaut and The Day of the Moon, got me writing again because of one character, Canton Everett Delaware III played by Mark Sheppard and his father Morgan Sheppard. I fell in love with character and the actor and wrote an 80K fanfiction called The Canton Chronicles. My fandom friends pointed me towards a show called Supernatural in which he played the baddie, Crowley. I caught up six and a half series to join along with their weekly watch.

Yes, I loved Crowley, but in series four, Castiel appeared making one of the greatest TV show entrances ever. For me, the connection between the gorgeous Dean and his angel was immediately obvious. I found others had seen it too. I discovered Destiel. This time around I discovered Tumblr. I watched fascinated as these two edged nearer to each other then pulled away. Maybe it was because I’d never watched the brothers in real time that I didn’t invest in their relationship. My investment in Destiel was total. This, for me, was Jack and Ianto all over again. I waited, and waited, and waited. I hoped and despaired. And yes, I loved Cockles too. Then they announced season fifteen would be the last. Would they go there? Could they make Destiel canon? I don’t think it was any secret that Misha was on board with the idea and Jensen had played bisexual before. Last week, during the US elections, Destiel trended higher than the elections and Putin because Castiel confessed his love for Dean. 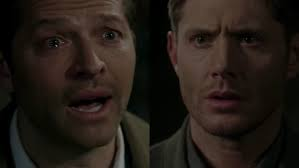 It wasn’t the first time he’d said I love you, but this was different. Misha has since acknowledged that this was different. Castiel says he wants something he knows he can never have, and those, for me, are the words which make this declaration different. It is a heart-breaking scene. It has made me happy, sad, and angry. I’m happy that Castiel said it. I’m sad Dean didn’t get chance to reply, and that this might be the last time we see Castiel. And I’m angry because, like Ianto, Castiel immediately dies. Ianto is sacrificed and Cas is sacrificed. ‘Bury the gays’ strikes once more. And I’m back watching videos, reading fanfiction, and writing a fix it, depending on what happens in the last two episodes, because I still have hope it’s not the last we’ve seen of Castiel.

I’ve thought a lot about the connection between my love for these two programmes and gay romance lately, and I think what these stories give me is the chance to become a cheerleader. I support Cardiff City and Leeds United football teams. I’m used to being happy and sad in equal measure. When I pick up a book, sometimes I wonder whether to continue, but by the end, I want the main characters to get their happy ending. TV and film often provide no guarantees for LGBTQ+ characters, but the stories I read do. And let’s face it, today we all need a happy ending. Fingers crossed, there’s still an outside chance for Destiel.