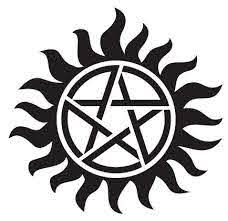 This time yesterday, I was anxious but still hopeful. I needed a win. It’s been a shitty year in so many ways for everyone, but also for me personally. Getting the ending I wanted on a TV show wasn’t going to get me mobile again, but it would have given me a reason to smile. Instead, today, I feel sad, I feel let down, I feel grief, I feel anger and frustration. I feel like someone took something else away from me. Those of you who have ever been invested in a TV show or a film franchise will understand this feeling.

I came to Supernatural in the middle of season six. I was part of the Doctor Who fandom, had found friends in it. Series six of DW stared a character called Canton Everett Delaware III in the first two episode played by Mark Sheppard. My DW friends also watched Supernatural and said he played a demon called Crowley in the show. I caught up those seasons quickly. I loved Crowley, and the brothers, Dean especially, but along the way, I found Castiel.

Now some people see it straight away, and some people don’t, but the way Dean and Castiel looked at each other, from the first moment I saw them, something clicked. Over the next nine years, that relationship develop, and I hoped, God how I hoped. Alongside my writing career, I wrote the odd bit of fanfiction filling in those fanfic gaps. Every season, I hoped they’d be brave enough to follow through with the feelings these two characters clearly had for each other, feelings which to me seemed more than brotherly. When this didn’t happen, the show was accused of queerbaiting.

Then they announced Supernatural would be coming to an end in this year – the year that has become the year from hell. In episode eighteen, Cas tells Dean he loves him – loves him. This is a declaration of romantic love which Misha Collins has confirmed. Misha said that he was told to play being in love with Dean from the beginning of the season, but as he continued, he realised he’d always played Cas this way. Dean doesn’t answer him in that scene, but you can see the emotion on his face. He ignores Sam’s call. This event shouldn’t have been something to simply brush off and not talk about, but it gets no mention beyond Dean saying Cas is gone. In episode nineteen, the world is fixed, and Sam and Dean drive off in Baby. Much of me wishes they’d left it there, but they didn’t, which brings me to why I’m so sad.

The writers and producers of Supernatural had the chance to do something massive with this finale. They had the chance to send a message to so many people that a man like Dean could be in love with another man. People would have talked about this for years. This would have been the show that killed everybody, not just the gays, but brought them back. They could have given Sam an ending with Eileen, a woman he loved, not someone whose face we didn’t even get to see. They could have made both sides of Destiel canon. Cas thought Dean would never love him. Dean thought Cas was an angel, a divine being, who couldn’t love someone as damaged as him. Cas told him what a good man he was, but Dean didn’t get a chance to process those words, and we didn’t get to hear how he felt about it. A character who had been on the show for eleven years confessed his love to another character, and that person didn’t even get to talk about it! A football fan would say - we was robbed - and we were. So many people were robbed. And once again the gays were buried. Although in this case, I think both characters would have been bisexual or pansexual, the result is the same.

Some people have blamed Jensen, but I don’t believe that for a minute having seen how he is around Misha and knowing what parts he has played before. At the Jus in Bello con last year, he clearly wasn’t pleased with the ending. Misha has yet to say anything. In the end, the writers bottled it. Did the powers that be step in? I don’t know. But in my view a chance was missed. This was a bad ending. It didn’t make sense either. The writer in me kept being jarred out of the moment. I wanted to feel but I kept shouting – no – it wouldn’t happen like that. Dean wouldn’t die being pushed on a nail. If he had to die, he’d have died heroically saving Sam or someone else he cared about. He certainly wouldn’t get to heaven, hear that Cas was there, and not want to find him. If for no other reason than, as he has often said, Cas is his best friend, and family doesn’t end with blood.

So, after the finale, I’m upset, sad, and more than a little angry. I’ll go back and watch the many episodes I love again, but not this one. This ending will go down as another of those disasters like Dexter or How I Met Your Mother as far as I’m concerned. For me, it let fandom down and didn't do the characters or the story arc justice. And the real truth is that I am not all right about it.