Never too old, or why I wrote While You See a Chance.

In 1979, my great uncle George got married. He was eighty-seven and his bride seventy-five, proving you are never too old for love—or are you? Recently, I’ve seen campaigns to get more diversity in romance stories, but I haven’t read much about age as an issue. I first thought about writing a story with older characters a couple of years ago. I did some research and among the information I found was this list from Goodreads, now extended from that time.


I will admit I haven’t checked on the ages of the characters in each book, but I did read the comments underneath. Many of these comments point out that the characters are under forty which seems to be the cut off point for being older, and that many of the stories have one older character not two.

Now, maybe it’s because I’m about the hit the wrong side of fifty-five, but forty does not seem that old to me. Where are the stories with characters in their fifties and sixties or higher? My great uncle obviously didn’t consider himself too old at eighty-seven and neither did his wife.


But no one wants to read about older people having sex I hear some people say. Well, okay, I get that we don’t have lithe young bodies anymore. Some of us have put on a few pounds, or developed pains in places, but that doesn’t mean we’d always prefer a nice cup of tea—and I do like my tea!


With all this in mind, I wrote the story that became While You See a Chance – it had a few other titles. I write mm romance so my lead characters are both male and in my story around sixty years of age. Writing a gay romance, or for one of my characters a bisexual romance, has its issues. I’ve been called a writer of erotic fiction and yes, my stories include sex. Would anyone want to read a sex scene with a character who has a touch of arthritis in his knees so isn’t likely to swing from the rafters anymore? I wanted to find out. 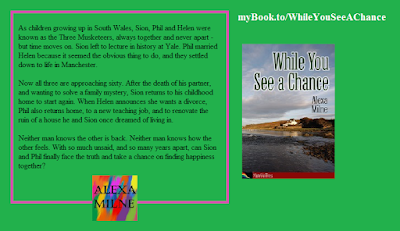 In my story, Sion, Phil and Helen were childhood friends growing up in South Wales at a time when sex between men was illegal. Sion knows he’s gay from an early age and that he’s in love with Phil, but he doesn’t tell him. Instead, he goes off to university and then to America, but never quite gets over those teenage feelings. Phil marries Helen because it seems the right thing to do. She has her reasons for her choice. They have two wonderful children, but aren’t happy. As the years go by, Phil becomes more and more conscious of feelings he had long buried but ignored. When Helen, rightly in his opinion, finds love elsewhere, they divorce and Phil returns home to take up a post as head teacher in the town where they grew up.


Meanwhile, over the Pond, Sion has had a good life, found love with Eric, and success with his lecturing and writing career. When Eric dies, he too returns home, and he has a family mystery to solve. When these two men, who haven’t seen each other for nearly forty years meet, long-unexplored feelings are exposed. As they negotiate their way to happiness, the two have to deal with their pasts and consider their futures. Phil doesn’t know whether he can come out at sixty and change his whole life. He feels every year of his age in the creak of his knees and the padding around his middle. He’s hardly love’s young dream. But when these two older men come together, it doesn’t matter – they work it out and love conquers all for them, and in the family mystery Sion finally solves. Usually, I find sex scenes difficult to write but these flowed despite the creaking knees, especially as I love writing humour in bed as well.


Once finished, the story went through a few changes. The finished book contains three same sex relationships, one set at the turn of the twentieth century, and two set now, the oldies Phil and Sion, and a younger couple affected by Brexit. How each manage to love becomes the heart of the story, and I can’t tell you how happy one review made me when it said love poured from every page.


In the end, love conquers fear in this story, and a publisher took a risk to put it out there. I hope more authors will take a chance and show older couples deserve their happy ever afters too.


The images used were found online. I hope the owners will allow their use to illustrate this blog post which celebrates love at any age.
Links
While You see a Chance
Amazon US
Amazon UK
Kobo
Smashwords
Posted by Alexa Milne at 07:28