Weekly Round Up 5th June

Monday morning and blog writing time. Last week was a bank holiday over here so I had a week off. Today, I’m writing from a very wet and windy Lancashire. Cat the younger very sensibly declined the opportunity to go out and is currently playing tig with cat the elder. 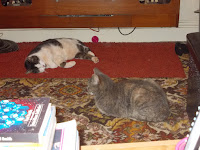 The last couple of weeks have been difficult ones here in Britain but we go on as always. I’m old enough to remember the terrorism of the 1970s and 80s. I didn’t think all Irish people were terrorists then, and I certainly don’t think all Muslims are terrorists now. The concert last night showed more about this country of mine – a country I love for its diversity. I read an idiot yesterday had said something about his people conquering Britain. I think the only time I’d heard of him before was when he was punched in the face. The funny thing is that this nation is made up of conquerors – Romans, Saxons, Jutes, Angles, Vikings, Normans. All came here and some stayed. We’ve welcomed others from all parts of the world, and I’m proud of that. We are stronger together.

Okay, time for me to get off my high horse. On the writing front, I’ve written a few blogs and reached 103K on WIP, so far called Half Full. I have one more scene left to write on this story and then it’s hopefully time to get my short Christmas story done. I’ve had some lovely reviews for My Highland Cowboy which is out on general release tomorrow. This is more of a fluffy story for me, but sometimes we all need a bit of fluff. I also blogged about older characters in m/m romance. While You See a Chance has MCs who are sixty. I hope people will give it a read as this story is very special to me.

I haven’t managed much time for reading, but can recommend Goodnight My Angel by Sue Brown and Tease, with more Tate and Logan, from Ella Frank. I’m really excited to be reading Draakenwood now, the ninth in the Widdershins stories by Jordan L hawk. My TBR list is growing thanks to joining The League, a sports romance based FB group. Continuing with the box set watch, we finished S2 of Fargo and are watching S3 week by week. Also completed S6 of Supernatural which picked up a lot at the end according to my fellow watcher who hasn’t seen the show before. Our next series is State of Play – the original BBC production.


So, this week is the final round of review posts for My Highland Cowboy and finishing this WIP. Outside it looks like winter again and I’m feeling a bit chilly.


Have a good week everyone.
Posted by Alexa Milne at 03:37