More Reviews for My Highland Cowboy


What started as a vacation fling quickly turns to more, more of something neither man is in a place to have or work around. There was a lot of push and pull between Duncan and Drew but none was drama filled. The chemistry within the months of them trying to figure things out was off-the-charts hot! Not many writers are this good at writing this type of push and pull and keeping the level of heat without letting the struggle overwhelm the storyline.


The writing was beautiful along with the world she created for us in the Highlands of Scotland; from the warm days of summer to the snowy days of winter.


I loved the story, the characters, and their families and I’m hoping to read a story about Lachie and Cormac, please!!


This is a very enjoyable read – and manages to combine the classic cowboy romance in the setting of the Highlands of Scotland – and the cowboy falls for a London based fashion designer who, amongst other things, makes lacy male underwear! SO much opportunity for hotness, in and out of clothing.


Ms. Milne has created a story which hangs together really well; it deals with the real issues of being gay in a remote community, and the ‘impossibility’ of someone wanting to uproot their life and move to such a remote location – however much they may care for the person. The issues of Duncan’s preferences for men or wmen were not looked at in any depth, even though I thought they might be. But there was no doubting the chemistry between them. The pragmatism of both men was interesting and usually not one examined much in romance, so I liked the issue being considered.


Overall, a good read, with some lovely scenes and fabulous side characters – thank you, Ms. Milne.


The Way She Reads
… the attraction is undeniably there, from the very first moment Drew and Duncan set eyes on each other, and Duncan’s feeble attempts to keep his distance really don’t stand a chance against Drew’s charms.


With two endearing protagonists, a fabulous and colourful cast of secondary characters, a potential sequel already lined up, lots of steamy scenes, and plenty moments to make you smile or laugh out loud, this story will keep you entertained from start to finish. Not to mention that the vivid and glorious descriptions of the Scottish Highlands may well tempt you to plan a visit of your own.


My Highland Cowboy is an interesting twist on the usually-American-set ranch story.  Taking place in the Scottish Highlands, the ranch is owned by Duncan, who has turned it into a dude ranch.  A successful ranch, but a lonely rancher, until he meets the indomitable Drew.  Drew is a fashion designer whose sister is marrying Duncan’s best friend at the ranch, and it’s his job to make the ladies beautiful.  He is full of swish with not a shy bone in his body, and he is catnip to Duncan’s inner feline.


The plot was a curious mix that shouldn’t work, but did.  The two men tried hard to find some semblance of balance in order to make their attraction work itself into something more.  A few days together read like a great many more, so while there was basically insta-love, which I normally don’t like outside paranormal books, it didn’t actually feel like insta-love, but rather like they had plenty of time to feel each other out, learn about themselves, and then come together as a pair.  The chemistry is strong, and their intimacy was very hot!


There is a decent size peripheral cast of characters, and I enjoyed watching their antics as well as those of the protagonists while dealing with the peripherals.  Written in third person past tense, the dialogue is engaging, the humor is strong, and the story pulls you deeply into their world.


A solid, fun read, I am rating this at four stars and recommending it for anyone on the lookout for depth and humor with love woven throughout.  I’m fast becoming a fan of Alexa Milne, and this is just another shining example of why! 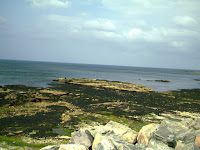 Confession time; cowboys aren’t my favorite thing, but Scotland was the draw here. Plus, the premise sounded promising, and I was looking forward to reading this book. Milne gives a sweet love story that, while could have benefitted from some more depth in places, was ultimately a feel good read I enjoyed.
The plot itself is wonderful in its simplicity. There’s nothing groundbreaking here, but Milne makes it work. Just two guys who are attracted to each other, trying to navigate their worlds when they are so very different from one another. Add in kilts, lacy men’s underwear, and some Highland cows, and you have a nice story. And if there is a sequel in the making with two secondary MCs, then I’ll definitely read it.


We see both of these characters’ points of view which allows us to understand these characters better.  I could feel Duncan’s confusion about his feelings that contradicted how his grandfather raised him but knowing that he can’t leave his ranch he resigns himself to nothing more ever happening.  Drew has never felt this strongly for a lover before and can’t seem to get Duncan out of his head, not even able to move on as he planned when he got back to London.  I loved that Drew realized he couldn’t live without Duncan and was able to adjust his life to make their dreams possible.


Cover art is beautiful and gives a great visual of Duncan and background for the story. 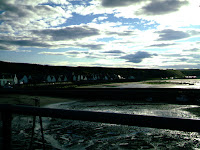 
Between the two guys, Duncan was clearly the more innocent one even though he was a decade older than Drew. Based on how he described himself and his past sexual encounters, it sounds as if he's on the asexuality spectrum, but hey, I could be wrong. His hesitance didn't have much to do with wanting to keep his sexuality quiet but more about his lack of experience and knowledge about what it was he was feeling towards Drew. That bit of naivete made Duncan a very interesting character, especially as he experienced self-discovery once he was with Drew.
Speaking of Drew, I admit that there were moments that I wasn't too thrilled with how he was pushing Duncan. Then there was the whole way he handled their last day together over the summer and then proceeded to not do anything about his feelings when he returned to London. The fact that it was Duncan who made the first move--not just once!--to want to spend time together made me want to smack Drew. Then there was the Sebastian situation. Argh! But by the end, Drew won me over, and My Highland Cowboy turned out to be a four-starred read. ♥


This is a sweet and sassy romance, with Drew bringing the sass as well as the sweetness. Duncan’s a great guy, and has a lot of love to offer, but his devotion to his heritage is holding him hostage in a place where there aren’t a lot of options for gay partners. I liked how they worked through things, each man making a plan to carve time for the other. These guys have so much love to give, and recognize that connections like theirs are special and shouldn’t be denied just because they aren’t 100% convenient.


There are really nice side characters here, who are supportive and loving of both Duncan and Drew. We get to meet some other closeted men or Duncan’s acquaintance, and the stage is set for new romances down the road. 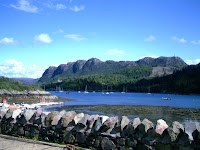