Weekly Round Up 12th June

Monday again. It’s blustery here in Lancashire and has been for the last few days, but at least it isn’t raining now. We even had the fire on for a while on one day. Cat the younger, the only one allowed out – cat the elder is deaf and gets lost – doesn’t like the wind ruffling her fur so hasn’t enjoyed the weather recently.


Of course, last week was dominated by politics over here with yet another vote. We stayed up until around five in the morning not quite believing all that happened. Now, I’ll admit I’ve never been much of a Corbyn fan but he’s done well and probably got more of the Labour party to pull together. I mean, who could imagine Labour taking Kensington in London where the average house price is £1.4 million? So now we have a hung parliament with the DUP calling the shots with their bigoted agenda. With many LGBT MPs in the Conservative ranks, and Ken Clarke, not to mention more women MPS than ever before, it’s going to be interesting to see how things go. In fact, two good things came out of the vote - the increase in female, BAME, LGBT and disabled MPS and that so many young people voted. This might help you work out what happened, or not! 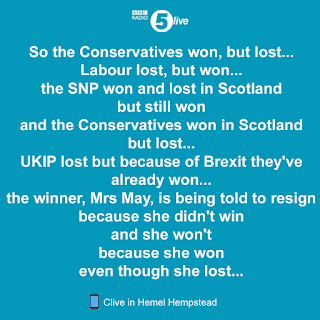 On the writing front, I finally wrote THE END on my WIP, Half Full, at 103K words. This is the longest story I’ve written. I think it might split into two stories, and it needs a third to finish it off properly and settle all that’s happened. I’ve made a start on the Christmas story, but need to get more of a feel for my MCs, Jason and Adam. I’m writing a May/Nov story – a bit more than Sep and less that Dec, which could be any length but aiming at about 20K. As I don’t plan, who knows?

Last week saw the general release of My Highland Cowboy. This story has received some lovely reviews. It is quite fluffy for me. After writing lots of angst, I wanted to write a story with less. The problems in this one are practical. It interested me to see comments about the age difference between the MCs. There is one, but I didn’t consider it much like in Sporting Chance. It’s what inspired me to write a real age gap story, I suppose. It has been a busy time promoting books. I’d also like to remind people about While You See a Chance. I’d love if people gave this story a chance. It’s had a few lovely reviews. I know it isn’t a typical m/m romance story as the MCs are old and it has a pretty important back story, but as I’ve said before, it was important to me. Again, I’d like to thank Rachel Maybury and all the bloggers and reviewers as well as anyone who retweeted or shared posts. Now, I need to get on with the next one and let Half Full settle before I edit.

We watched State of Play which held up as a story and now we’re back to Supernatural, season seven which isn’t a favourite – lots of dick jokes and less Castiel, although what there is of him is great. Started watching Orange is the New Black as well as The Handmaid’s Tale and Poldark is back. Really upset that Sense8 has been cancelled. Why seems a bit of a mystery. It is such an awesome show, but maybe it’s simply too expensive.

I haven’t managed much reading as I’m only getting time before I go to sleep. I’m enjoying Draakenwood by Jordan L Hawk, and have added around five more books to my kindle. The TBR list is growing again.


That’s it for this week. Have a good week everyone and at least us Brits have the joy of knowing President Trump isn’t going to visit anytime soon.