Hello. I know it’s been a while, but I thought it was about time I put fingers to the keyboard.

This week, I have mostly been watching the Olympics and editing. I love sport. I used to play netball and hockey in school which surprises people as I’m not exactly built like a sportsperson. I also used to swim a lot because I lived on the coast and my home town had at least four beaches and a huge open-air swimming pool. My school, which was built in 1971/2, also had an indoor pool which you were allowed to use unsupervised if you’d passed a bronze personal survival award. Strangely, sorting out, I found the certificate I’d earned aged fifteen among some papers this weekend.


As I write this, I’m watching people fling themselves in the air wearing skis. As someone who is terrified of ice and falling over, I sit in awe of these people. I love their attitudes. I also love watching the curling – see my current read below – and the figure skating. Who would have thought the Brits would dominate sliding down face first on a tea tray? I’m so happy to see athletes like Adam Rippon and Gus Kenworthy be able to be open about their sexuality. Their representation will mean so much to young people around the world.

Yesterday, I also spent a couple of hours watching a game of football between Tottenham Hotspur of the Premiership and Rochdale, a couple of leagues below. They were playing in the FA Cup. Now, I’m not a fan of Rochdale particularly, but they were the underdogs and they didn’t give up. They scored a goal in extra time to get a well-deserved draw and a reply at Wembley. I sat here clapping and cheering with a huge smile on my face. Sport does that. My team, Cardiff City, are also doing well this year and managed a win on Saturday with my little five-year-old nephew and his mum in the crowd. It was the first time they’d been after my brother’s death so I’m glad our team managed a win for him. Like his dad, he loves football and is a pretty good player. His mum loves the game too.


In other news, we’ve made an offer on a bungalow and had it accepted. Hopefully, in a few weeks we’ll be able to move in and I’ll get more independence back with having a bedroom and bathroom downstairs. We’re just hoping we’ll have enough room for all our books! It’s probably a good job I have a kindle as we’ve have another 600 to find room for.


On the writing front, the news is that I haven’t done anything new, but I am now at least editing. I sort of lost faith in one story in which I’d split 110K words into two and was hoping to write a third. Still not sure what I’m going to do with it. I love the characters, but I’m not sure my story does them justice. So, I put them to one side and took up my May/December story. I think it works. I’m on to the last few chapters now written before Christmas which are all over the place but sortable. I’m not sure of the end, and as usual could do with some eyes looking over it, but we’ll see. It would be nice to submit something. 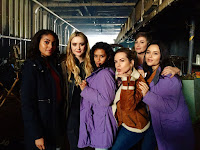 As well as the Olympics, we have managed to watch a few box sets. Our current watch is How to Get Away with Murder and we are up to season three. We’ve also watched series two of Dirk Gently which I enjoyed more than series one. We continue to watch Supernatural and I’m really enjoying series thirteen. I’m hoping for the spin off Wayward Sisters to get a chance too. Next on the list is the latest Game of Thrones. We also watched God’s Own Country – watch it if you can. Yes, it’s dour in places and one of the MCs isn’t particularly likeable to begin with but the growth in their relationship is lovely. Next on our film watch is Thor Ragnorak followed by Blade Runner 2049.


As for reading, my current read is Throwing Stones by Avery Cockburn. I’m not sure I’d ever thought I’d read a great story centred around curling. I’ve also read all of Rosalind Abel’s Lavender Shores series. I enjoyed them and found her mix in the stories much like my own. Other reads have included Love Times Five by Lily G Blunt and Dream by Garrett Leigh, both different reads for me but enjoyable. I’ve also read Chuck Wendig’s Damn Fine Story which had me really examining this current edit. Well worth a read.


That’s my update for now. I’ll get back to watching the ice dancing. Good writing everyone and happy sales. And I’ll just add you can also find me on Book Bub and Queer Romance Ink (though I need to add my books).