Many many thanks to D P Denman for organising this blog hop to celebrate love in all its forms and fashions. Below you will find links to all the terrific authors who are taking part and also a link to a major Rafflecopter giveaway – enter it and you can win not only a Kindle but a whole load of ebooks to put on it.


Shapes and sizes - Forms and guises

Heroes, like love, come in all shapes and sizes and all forms and guises. When I started to write, I made no decision about which genre to write it in—I’ve always loved gay romance. I began writing fanfiction in 2009, and in these stories I wrote about heroes like Captain Jack Harkness, the Doctor, Dean Winchester and Castiel. My first book, Sporting Chance, features a six foot six inch tall, blond rugby player. Don’t get me wrong—I love hero as much as the next person. Many m/m romance novels feature hero occupations—police, agents, firefighters, soldiers, cowboys, doctors, lawyers. But what about men with ordinary jobs? Don’t they deserve to find love too? What about the pest controller, the binman, the window cleaner, (or is that too like a Confessions film and you have to be as old as me to remember them) the roofer, the hospital porter, the shepherd, the archivist, the bus driver, the surveyor, the railway guard or the taxman? All of these are necessary jobs, but not very glamourous. I don’t think I’ve read a m/m romance which had characters with any of these jobs, and I’ve read a few.


When I came up with the basic idea for my story Rainbow Connection, I decided to give my main characters occupations that didn’t dominate their lives—they didn’t go home with their jobs, but left them behind when they left the building. These aren’t jobs which keep you awake in the middle of the night, or give you bad dreams.


I originally intended to write a story about the theme of finding love again after you’d lost your first love, and to a certain extent that theme remains, but then I read two stories in the same week—one about someone who dyed their hair the colours of the rainbow and another about a family, but I can’t say much about that story without giving spoilers. Thus Ceri and Mick were born. Two men looking for love but who presented a challenge to the artist who designed the cover below.


Ceri dyes his hair every week. He dreams of being a professional skate boarder and he fills the vending machines and water dispensers in various offices to pay his rent. Mick works in one of those offices as a night time security guard. He fills the long hours watching his favourite programmes and reading books. Then, one night, a new person comes to deliver the water bottles and vending supplies and Mick can’t help watching him as he does his rounds. When they meet for the first time, it’s not really a case of instant love more instant curiosity. Ceri sees his life as an open book, while Mick keeps his life under lock and key, but maybe they can find something they have in common something they both love which brings them together.


I’d love to read more stories about men with ordinary, unglamorous jobs and maybe a few more when the men don’t have perfect bodies and six packs. Everyone has their story to tell and everyone deserves to be loved. We are all somebody’s hero.

Two men, one with a past, and one determined to give them a future, together.

Mick Flanagan has kept himself hidden since his only lover died three years before. He works at night, keeps to his routine, has impressive facial hair and avoids contact with other people as much as possible. He lives in his imagination, where he is part of a crew of space pirates roaming the universe, spending his spare time writing long stories about his heroes. Enter Ceri Llewellyn, with his constantly changing rainbow-coloured hair, who for reasons Mick doesn’t understand, seems determined to talk to him. Ceri has been living a happy-go-lucky lifestyle since he was let down by his first long-term boyfriend, Jules, but something about Mick calls to him. His twin, Megan would say that it’s because he loves a cause, and perhaps she’s right to begin with. They find they have a mutual love of Doctor Who and this gives Ceri an insight into Mick’s personality and brings them together. Ceri suggests that they visit Doctor Who’s Cardiff locations, and Mick can’t resist the temptation of visiting places he has only seen on the screen. Gradually, Ceri introduces Mick to new experiences, but Mick has a past that contains more than a dead lover. Can Ceri show him that he deserves to be loved but, above all else, help him find his true self?

And now the big cover reveal. I hope you like it. 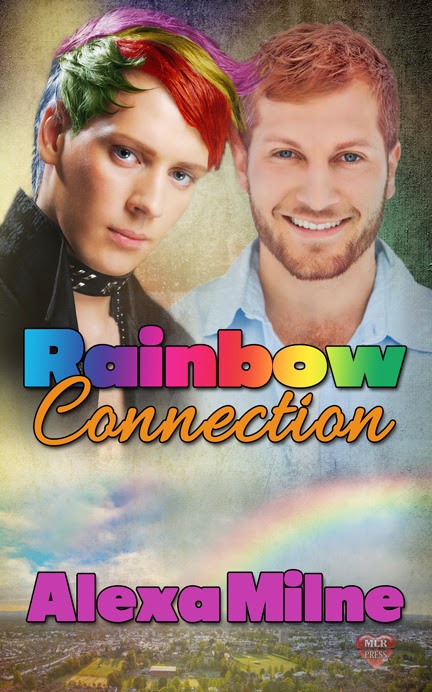