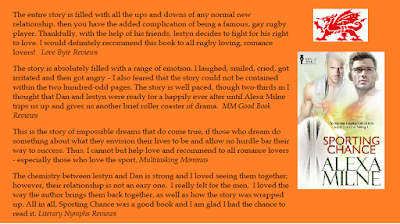 Sporting Chance was my first published novel. I began writing it while still in my full-time job of teaching, fitting it in before school, at lunch time, and at night after marking. It took nearly three years to finish, and the first draft was mostly written by hand.


Most people know I started my writing life writing fanfiction, mostly in the Torchwood/Doctor Who fandoms and later in Supernatural. Coincidentally, today is the eighth anniversary of the first showing of Day One of Children of Earth and I’m currently listening to one of the Big Finish Torchwood CDs from the set -  The Lives of Captain Jack—still a fan.


Dan and Aron, two of the characters in Sporting Chance, began life as original characters in one of those stories. In Torchwood High, they were teenage boys who had just realised they loved each other, then I callously split them apart in my first novel. I did feel guilty about that, but then I did give Dan someone else. Dan was always a rugby player and had to be, like me, Welsh. I wanted him to be openly gay rather than this being a story about coming out. Around the time I started writing, Gareth Thomas came out. If you ever get a chance, read his book. Alfie, as he was always known, was a superb player and has become a trailblazer for others. Dan isn’t based on him though. Physically, he’s based on another lock forward – I’ve always had a thing for locks – it’s the height. I decided instead to concentrate the story on what it is like to be famous, gay and looking for love.

Iestyn, the other MC, is a history teacher – yes so was I – who literally falls at Dan’s feet. The romance begins with a dinner date and continues in secret. Iestyn has a great family and friends who can’t quite believe he’s caught the eye of the best player in Wales. Eventually, their relationship is outed and here the problems begin for both men. At the time I wrote the story, there was a lot in the news about phone tapping of celebrities, so I speculated about press intrusion and how people make things up. Then, as the nasty author, I split them up in order to bring them back again. That reunion isn’t easy though, and help comes from surprising places, namely Dan’s ex-boyfriend, Aron. This is, of course a romance, so it had to have a happily ever after.


I submitted the manuscript to a couple of places and no one was more amazed than me that a publisher took a chance on the very raw story. I went on a steep journey learning about all sorts of things, like independent body parts and passive voice thanks to my editor, who was immensely patient with me. Finally, in November, 2014, Sporting Chance was published. It received some lovely reviews and some not so lovely, but such is the life of a writer. It was hard and it still is, dealing with the highs and lows, but a few years later, I’ve had more published and I’m still writing but Sporting Chance was where it began and it still sells double figures most months.


You can buy Sporting Chance in these places. And if you want to know what happens to Aron I tell his story in Comfort Zone.