Sorry, it’s been a couple of weeks since my last blog. This morning, I’m having a bit of a panic about pulling a muscle behind my right leg as it’s aching. Last year, I managed to tear the thigh muscle behind my left leg which led to me being stuck upstairs and then down when I did it again. I don’t usually mention it here, but combined with my arthritis, my movement has been limited. So, here I am sat on a cool pack on this dull and overcast September morning. I can hardly believe it’s October at the weekend.

Right, enough of that. Lots going on in the world. The mess that is Brexit continues to annoy the hell out of me. More stupid in fighting and no one seeming to have any idea what they’re doing. Then there are the ‘mad’ men trying to lead us to war, which reminds me of kids in the playground. I always described world war one as two gangs of boys simply running out of options and then choosing to hit each other. Finally, the earth seems to be trying to tell us something and it isn’t good. Meanwhile, we’re still trying to put three houses into one and had over twenty bags of stuff collected by the British Heart Foundation with no doubt more to come.


On to the writing news. I wrote words last week, around 4500 of them on my current WIP. This is my age difference story which has a title as well. It’s now up to nearly 32K words, but I’m not sure how long it’s going to be by the end. They have finally gotten past the kissing stage, but only just, and it’s going to take a rewrite because the MCs keep telling me things they didn’t mention at the beginning of the story. Book 2 of my trilogy set in Norfolk is ready to be sent to my beta, and I have ideas of what I need to tackle in the third part which I intend to write when I’ve finished this story. I still have an unfinished story which I left at 20K words hoping for inspiration.


In other writing news, the anthology of contemporary gay romance, Right Here, Right Now is out on 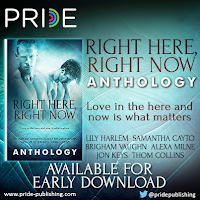 general release 3rd October, but can be pre-ordered now from Amazon, Pride Publishing and First For Romance. My story, The Matchmaker is a fluffy piece set in South Wales. The story will be released on its own in November with a wonderful cover from Emmy Ellis. I am in great company in this book, so why not check it out?

And onto watching and reading news. I haven’t managed much reading over the last few weeks, but have completed Yanni’s Story by N R Walker. I’ve enjoyed this series but I have to admit to having an issue with ‘daddy’ stories. I nearly put this down on several occasions, but did finish it. Other than this, which is a personal squick for me, the story, as always, is well written and poignant. It also helped me work out a few things about my own age difference story. I’m currently reading two other books. Firstly, The Monet Murders by Josh Lanyon. I love Josh’s work and I enjoyed The Mermaid Murders, but I am finding Sam’s behaviour annoying. I won’t spoiler. I hope it’s resolved, but then again, my favourites Adrien and Jake had their moments of stupid behaviour too. I’m also reading A Place Called Winter by Patrick Gale. It’s interesting comparing gay romance and gay literature and how they are structured and written. I keep thinking I wouldn’t get away with that huge section of exposition or that info dump, not to mention the use of adverbs. Still, I have enjoyed it and I’m still hoping for a happy ending. Next read will be Memories by Ruby Moone, followed by An Unsuitable Heir by K J Charles, or Romancing the Werewolf (see the fabulous cover) by Gail Carriger.

On our boxset watch, we have finally finished all twelve seasons of Supernatural before season thirteen begins next month. Sadly, I’ve not managed to persuade my fellow watcher of the existence of Destiel – oh well. We are currently keeping up with Victoria, in which nothing much happens, and the next watch will be World Without End based on the books by Ken Follet set in Medieval England, followed by Buffy which for me will be a rewatch. I’ve also nearly finished watching Shadowhunters which I’ve enjoyed mostly for Magnus the Warlock. Also this starts today and I may be a little excited.

That’s everything for now. I hope everyone is well and happy sales to all my author friends out there.